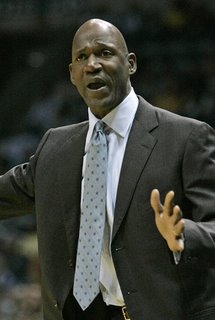 As the Oregonian reported today, I am involved with ex-Blazer Terry Porter and two other local guys in an effort to raise the capital necessary to buy the Trailblazers and keep the team in Portland.

We've been working on this deal for about six weeks, quietly putting the pieces in place until we could make the public announcement that we are seeking local investors.

The Blazers are too important to this town to just sit back and allow them to leave town. This city was once head-over-heels in love with the Blazers, and it can be again.

Who better to lead them back to their former glory than the one player who more than any other symbolizes what Portland fell in love with about the team during their heyday?

We have lined up $100 million in debt financing for the purchase, contingent upon raising significant local investor equity capital to round out the purchase. Terry will be in town next week to meet with prospective investors.

We met on Tuesday with NBA Commissioner David Stern to let him know our plans. It was clear to me at the meeting that Stern really wants a resolution to the Blazer problem, and that he would be perfectly happy to work with us provided we can raise the local investor equity necessary to buy the team.

The premise behind a Terry Porter led purchase is that Portland will once again support the Blazers if the players have good character, try hard every night, become part of the community, and respect the fans and the game. In any organization, the personnel tend to reflect the values and the character of its leader. Terry's team will reflect his character.

Terry will say to the people of Portland: "I pledge to put a team on the court that you can respect. We may not win right away - that will take time. But I will field a team that earns your trust. We will not ask the city for any public subsidy. The only public support we ask is to come back to the Rose Garden and support our team. Together we can BRING BACK RIP CITY!

We've put together a little web site where people can express their support of Terry Porter buying the team. Please give it a click and leave your name in support.

As the Oregonian reported, finding the local equity to make this happen is a difficult task. Terry is committed to doing everything he can to keep the Blazers in Portland. He's been personally calling several dozen prominent local people and businesses to ask them to attend a meeting next week where he will present the details of the proposal.

I've had occasion in my life to spend a lot of time around sports celebrities. I can say without exaggeration that Terry Porter is in a league of his own. He is humble, smart, charming, funny and willing to work hard. All the qualities that Portland came to know of him when he lived and played here -- they are absolutely true. They aren't just image - Terry Porter IS a class act in every sense of the word and I consider it to be a privilege to be working with him on this effort.

I'll post updates on our progress on this blog. Go to the website and join the effort.

Help Terry BRING BACK RIP CITY!
Posted by Rob Kremer at 7:02 AM

Great article Rob! I remember the glory days of Clyde, Kersey, Buck Williams and Terry Porter. Portland was all about the Blazers.

I cannot believe the Blazers rapid descent into mediocrity. It seems Paul Allen has not done a very good job of managing the people running his organization.

Good luck and I hope you succeed in bring the Blazers back to glory in Portland!

How did you get involved with this?
Every time I turn around I see you doing something somewhere - radio, tv, now helping Terry Porter buy the Blazers!

So let me get this straight: you are an education expert/school reformer/writer/political commentator/NBA franchise owner.

Does that about cover it?

I was just thinking what should happen is that one of the ex-blazers from the glory days should step up and buy the team.

OF COURSE it would be Porter. He's the classiest of the class acts who we fans all fell in love with.

Are you kidding me?

I will go to games again if Terry Porter is involved.

Didn't Congressmen Blume, Bluman, uh Earl, pass a bill allowing ownership groups that can be made up of the people of the city, ala Green Bay?

If we can't get the big guns to pony up, could we get many people sending a little?

This is great news! I've been to two games this year, and one I left halfway through I was so bored. I was at the game last night actually, and again, it was awful.

The Rose Garden is half full, there are huge blocks of open seats, the crowd is boring and sleepy, the players aren't up to par.

My grandparents had front row, center court tickets while I was growing up, and my dad worked for the Blazers for some time, I grew up around them and later bought season tickets. We gave them up in 2002 and haven't missed them one bit since. I'd love to see this team turn around back to what it was years ago.

It would be great to buy the tickets again and let my children enjoy it as I did.

One thing that HAS to go - the Hip Hop group - unclassy and awful! Even my 14 year old daughter thought it was distasteful.

Hi, We're all really glad that you and Terry are trying to make this happen. I'm one of the members of the Blazer Fan Forum and we're working on a way to get all of us long time Blazer Fans to help you and Terry. Check it out -

Earl's bill did not pass - it was only introduced.

However, it is a great idea. The time is ending for ownership models that make sports franchises the province of a few wealthy benefactors.

The time has come for a more co-operative model - where literally millions of people can share in the risks and rewards of owning a professional team.

Allow people to put down promises of deposit ranging in value from $1,000 minimum to $100,000 maximum. Let that part of the financing make up 49% of the ownership stake. Then, the "big boys" can own the rest and retain operational control.

The 49% wouldn't have to be listened to on decisions such as draft choices and contracts, but their input could be gathered easily through the Internet. Voting power would of course be proportional to the equity stake.

Make the Blazers a true community asset rather than a rich man's plaything! If the money is there within the community to support the team, it will come forward - without public subsidy.

Interesting that your "supportterry" website is registered to someone who is a former Trail Blazer employee, Joe Vaughn.

Joe Vaughn is one of our team members working on this effort.

Rob, we may not agree about much on the political side, but I wish you the very best luck getting this thing together. It feels like the first positive thing I've heard regarding the Blazers in several years.

Isn't it great that political differences of opinion melt away when something like this comes up?

I appreciate your encouragement. This is an uphill climb for sure. We are making progress but we are well aware how hard it is to raise this kind of money.

hey is there any way i can help this campaign?

Don't start screaming until you hear me out. I say to hell with leaving the team in the Rose garden. Change the name to the "Oregon Trail Blazers" (which would give recognition to the true fan base). Then move the team down I-5 to tap the Salem/Eugene market. Oh, and good luck.