I have been absent from my blog for several months while my wife runs for the state senate, but I am breaking my self-imposed exile because of this news.

Dick Wendt was, quite simply, a great man. He bought some sawmill assets out of receivership in the 1960's and built a company that became the world's largest manufacturer of windows and doors. He did it from Klamath Fall, Oregon.

I had the very good fortune to get to know Dick and his lovely wife Nancy. I could write a dozen long blog posts about his accomplishments in life - many of which had nothing to do with his business success - but I will leave most of that to the articles that you will see in the coming days.

But I will mention something about Dick that most people do not know: he was basically the architect of the welfare reform of the 1990's that moved millions of people off the welfare rolls all over the nation. This is not an overstatement.

I had the pleasure of listening to Dick and Nancy tell me and my wife the story of the how he started and grew his company one summer evening a few years back on the deck of his lake cabin in the Cascade Range. There was nothing pretentious about Dick. He lived in the same house in Klamath Falls that he bought in the 1960's. He drove a Jeep. His lake cabin was just that - a cabin. Rustic, maybe 1000 square feet.

When he became wealthy, he turned his talent and treasure to making the world a better place by reforming the institutions that have failed us, such as welfare and social security.

Dick Wendt was a great man. I am lucky to have known him, and I feel a great sense of honor that he considered my own efforts at reforming education to be worthy of his support.
Posted by Rob Kremer at 10:36 PM 13 comments:

I've been ignoring my blog lately. Here's why:

I am consulting on the Jim Huffman for US Senate campaign, and my wife is running for State Senate against Sen. Richard Devlin.

This has been consuming all my time that I might otherwise devote to expressing my opinion here on my blog. If you have been checking in, thank you!

I'm sorry, but my updates are going to be less and less frequent for awhile.
Posted by Rob Kremer at 7:43 PM 19 comments:

Where is the adult in OUR room?

This is just fabulous. Please take the time to watch this 26 minute address by New Jersey's new governor to the New Jersey League of Municipalities.

When I listen to something like this - an all-too-rare display of straight talk, mastery of fact, and laid-bare reality, I just get angry. Angry that we NEVER see this in our political class in Oregon.

Why do we get buffoons governing us, and other states get guys like Christie?

Where is the adult in OUR room?
Posted by Rob Kremer at 7:20 AM 9 comments:

State Rep. Matt Wingard is doing a "birthday money bomb" fundraiser for his 37th birthday - donate $37 to his reelection campaign.

He is close to his goal - please help me put him over the top. Click here to donate.

Here are a few good reasons to send $37 to Matt:

1) It will annoy the BlueOregon crowd
2) When he meets his goal he can send a press release reminding the Democrats how he beat them last cycle despite them spending hundreds of thousands of dollars on the most vicious personal smear campaign in recent memory, perhaps of all time.
3) 37 is a prime number. He won't have another prime number birthday for 4 years.
4) Matt is going to be Speaker of the Oregon House someday soon.
5) If you can find a smarter, more articulate, better state representative - send HIM or HER the $37!
Posted by Rob Kremer at 12:51 PM 3 comments:

I don't know how many times I have heard from educators and liberals that abstinence education doesn't work. Today a new study was published in the AMA's February 2010 Archives of Pediatric and Adolescent Medicine gives very strong evidence to the contrary.

The study also showed that so-called "safe sex" training doesn't change sexual behavior one bit. The study is out of the University of Pennsylvania, and was the gold standard of such studies in its design, which used a full random assignment of the different methods studied.

There have been 15 prior scientific studies done looking at the effectiveness of abstinence curricula, and 11 of them have showed positive results.

Don't believe them when they tell you it doesn't work!

OK just kidding. But it IS pretty ironic that the world's most notorious terrorist has joined the AGW jihad.

He hasn't been able to bring the US economy to its knees through terror strikes. This is just a change in tactics.

So, what is the difference between Al Gore and Bin Laden? Size of their carbon footprint, I guess. Bin Laden lives in a cave, Gore in a 20,000 sf mansion.
Posted by Rob Kremer at 8:55 PM 3 comments:

Back in the '08 election, Carla Axtman at BlueOregon hyperventilated over an essay that now Rep. Matt Wingard wrote about the aftermath of Hurricane Katrina. She was outraged because Wingard wrote that it was actually a "blessing to many" that the hurricane wiped out most of the public schools. He wrote:

In the summer of 2005, Katrina destroyed most of the New Orleans Public School District infrastructure—a blessing to many, since the district was one of the worst performing in the country. According to published reports, 73 of its more than 120 schools were considered to be “failing,” according to the state’s educational accountability standards. On one 2004 measure (the GEE test of highschoolers) 96 percent of Orleans Parish students were below basic in English, and 94 percent were below basic in math.

In the wake of Katrina, the Louisiana State Legislature turned over most of the area to a Recovery School District headed by its own superintendent. That superintendent has begun chartering many of the Recovery District schools, which in turn has attracted some of the leading charter school operators in the country. Sixty percent of schools in New Orleans are now chartered.

Carla Axtman thought that was "disgusting," and called him an "ass."
OK, fine. But guess who agrees with Matt Wingard?

President Obama's U.S. Secretary of Education Arne Duncan! The Washington Post reported today that in an interview to be aired this weekend, Duncan said that the hurricane was "the best thing that happened to the education system in New Orleans."

Duncan apparently went on to make precisely the same point that Matt Wingard made, about the fact that New Orleans had a rare opportunity to start over from scratch with their public schools, and they are building a new system based on charter schools, choice and competition.

Gee, maybe Rep. Matt Wingard is perhaps the TRUE progressive here. He cares about how well the school system serves its clients.

It sure seems as if BlueOregon and Carla Axtman care a lot more about unions than about the kids. Gee, how "progessive."
Posted by Rob Kremer at 6:08 PM 8 comments: 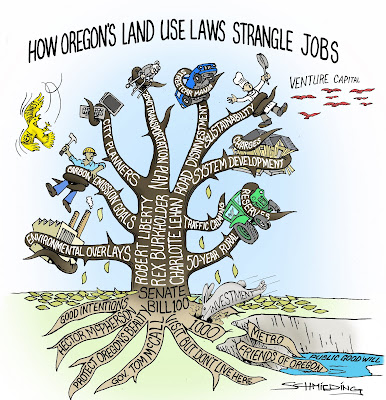 The evidence is accumulating daily, so much so that it is seeping into local media coverage and even the race for Metro President:

Oregon's land-use laws are killing our economy. Just in the last few days, more stories have emerged:
The common thread here is that Oregon's land use laws are killing our economy. We pretend that bureaucrats and planners somehow have superior knowledge about productive use of land than the owners. In reality, the laws just give preservationist no-growth pressure groups a legal bludgeon with which to get their way.

For years, folks like Rex Burkholder and Bob Stacey, two candidates for Metro President, have been at the forefront of this Soviet-style planning system. So it is laughable to see them now try to lip-sync a "jobs" tune.

But the real problem is the land use system itself. Pretending that Metro will somehow reshape itself to have an economic development focus is just dreaming.

Metro, and the land use system it has fed off for thirty years IS THE PROBLEM.

Will Oregon leaders ever figure this out? I doubt it. This is about world view and ideology. That doesn't change. We have competing world views in our political leadership, and one has held power in Oregon for going on three decades. The long-term damage of that view is coming home to roost.

It will have to be defeated.
Posted by Rob Kremer at 6:27 AM 5 comments: